​When we woke up this morning we decided we needed a day of rest and decided that Hartland Quay was the perfect place to get it. So we took the bus to Hartland, which is the closest the bus comes to the quay, and hitched a ride from a wonderful woman named Pat, who is the friend of Merlyn, who is an artist and who I will write an entire page about later. 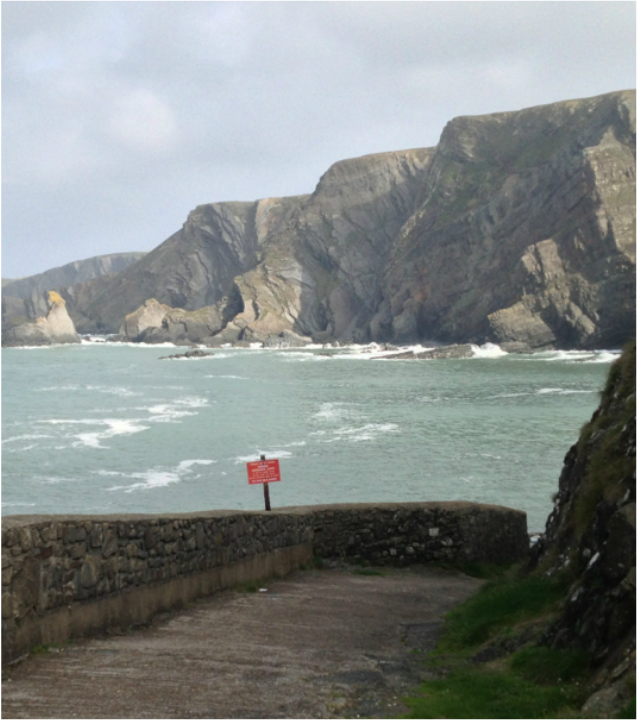 We get a ride from Hartland, down the few miles to Hartland Quay, then walk down to the beach.We're walking slowly. We're pretty wiped out. 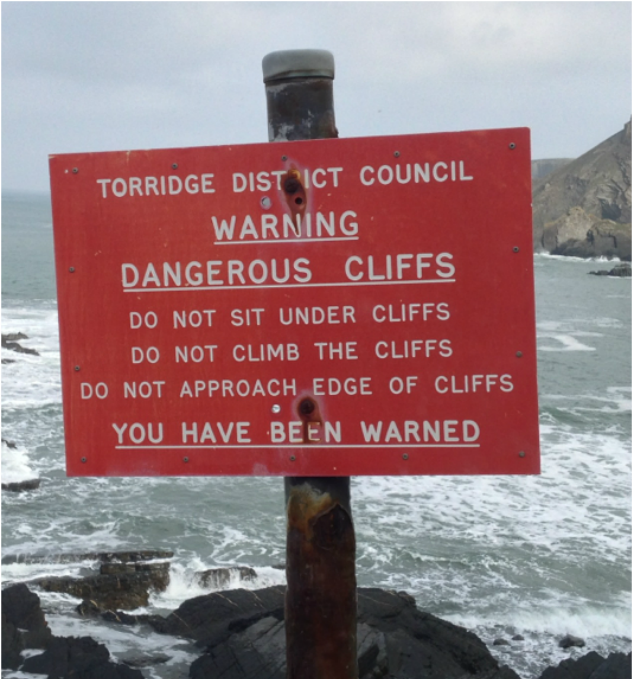 Chunks of earth, sometimes gigundo chunks, like this one here, are always careening down the cliff. 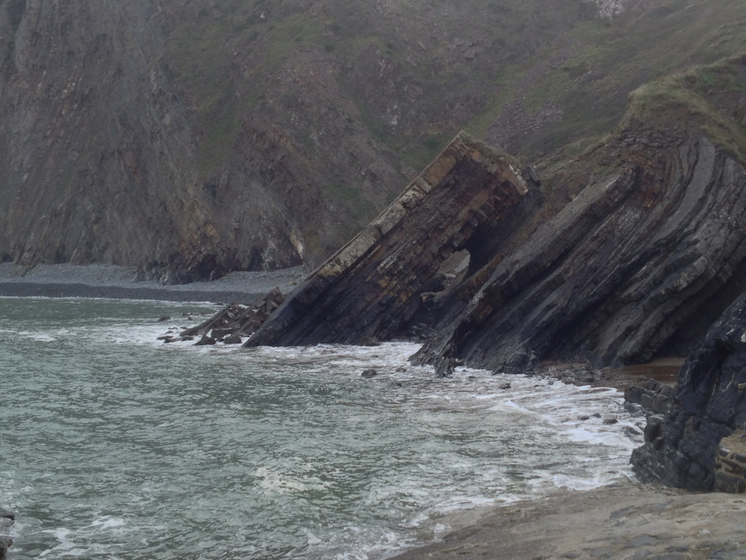 You can see what the centuries have done to the cliffs--turned everything on its side. 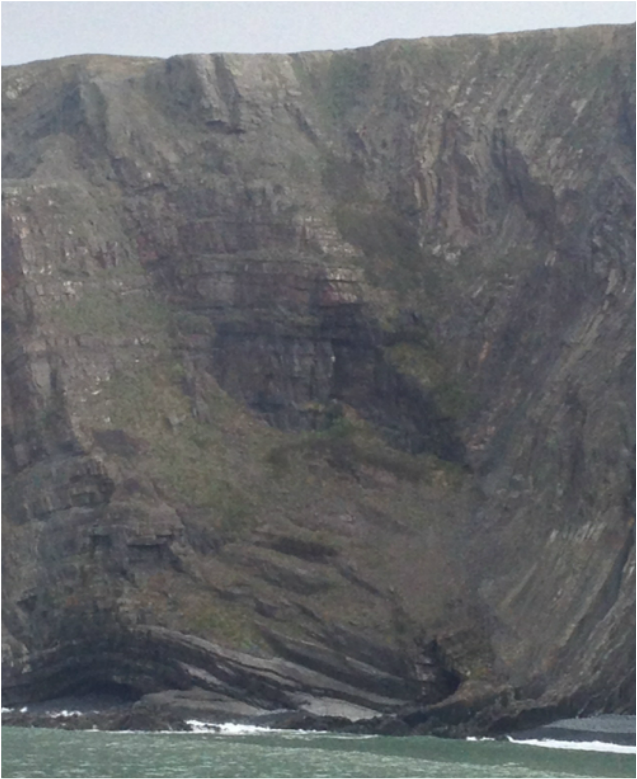 That's granite. It's heavy. Yet it slid down like chocolate pudding or mushy Jello, There must be forces at work here. Forces, I say. 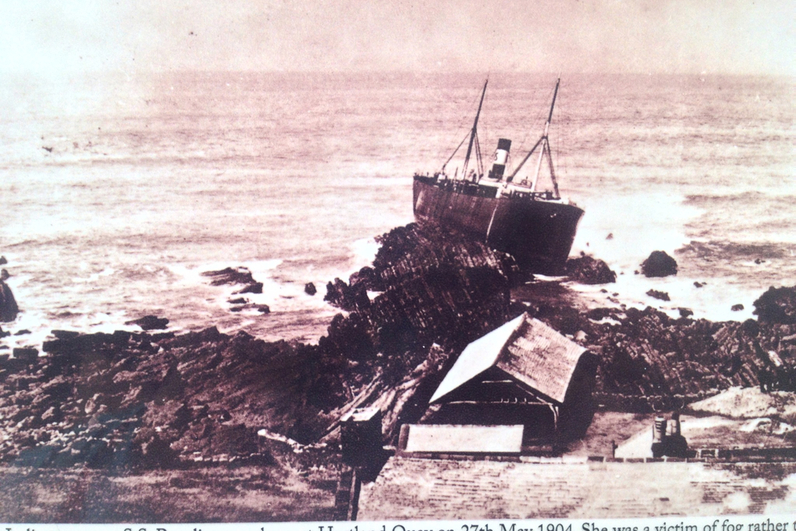 The quay is an especially dangerous port of call. It probably made an excellent smuggling landing. 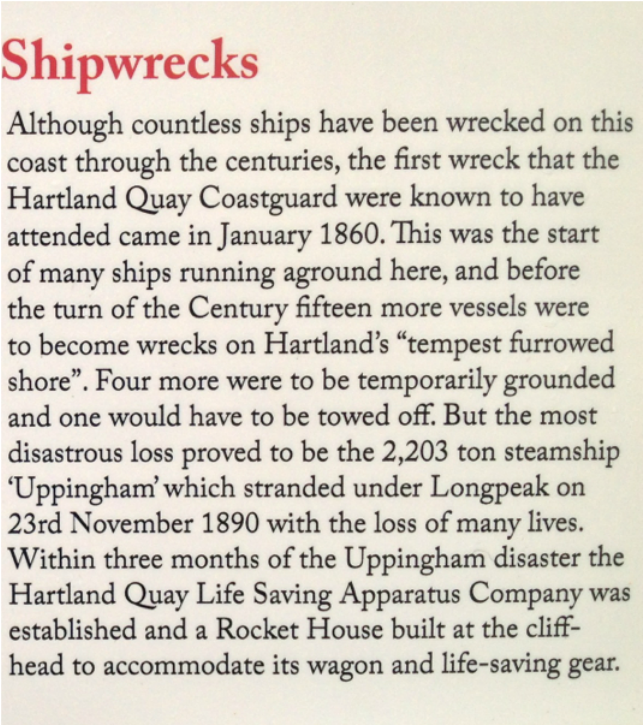 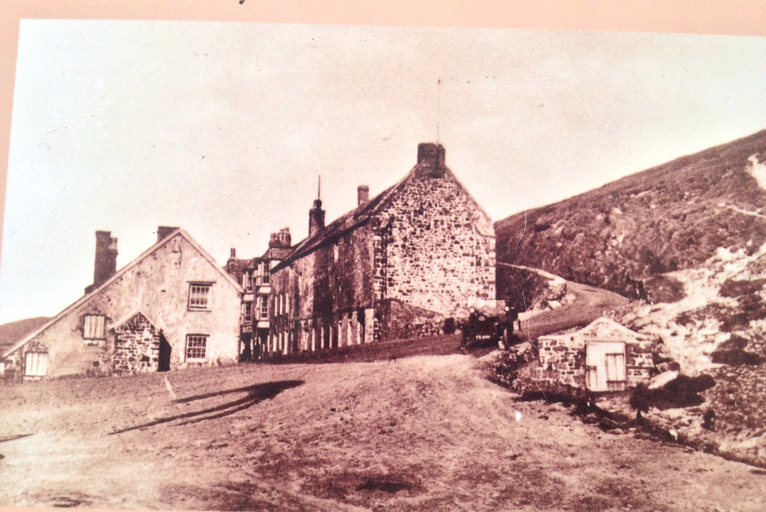 Hartland Quay is a wild and windy little alcove off the Atlantic. Not many wander way out here. The closest bus stop are miles from the coast; food and drink and accommodations are not easy to get to; and you are miles and years away from the world. It's exhilarating. The air is different. 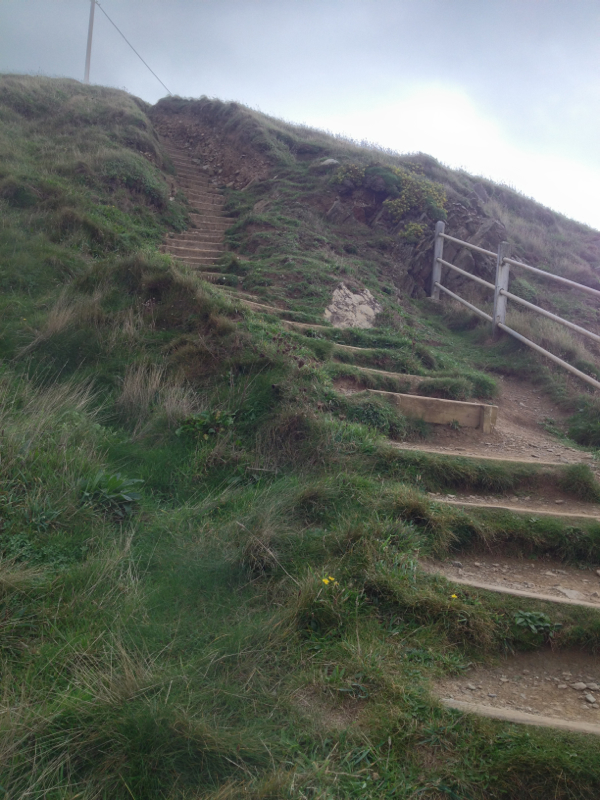 Once we get some tea and food in us, we decide to head up the path. 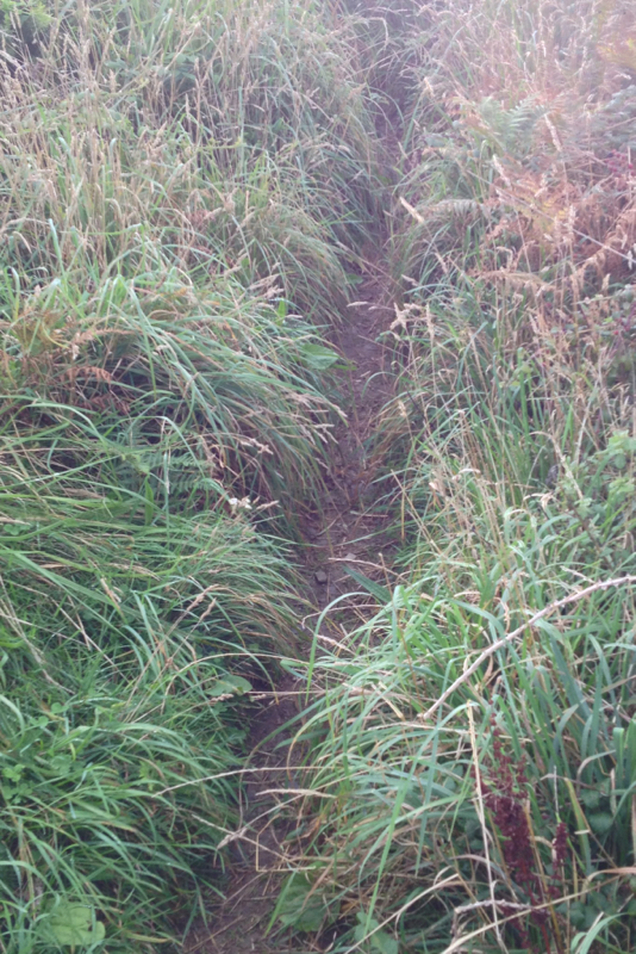 The path up is miserable-—the kind where you don't talk, you don't look up, you just concentrate, hard, on putting one foot in front of the other and then again and again, until you reach the top. 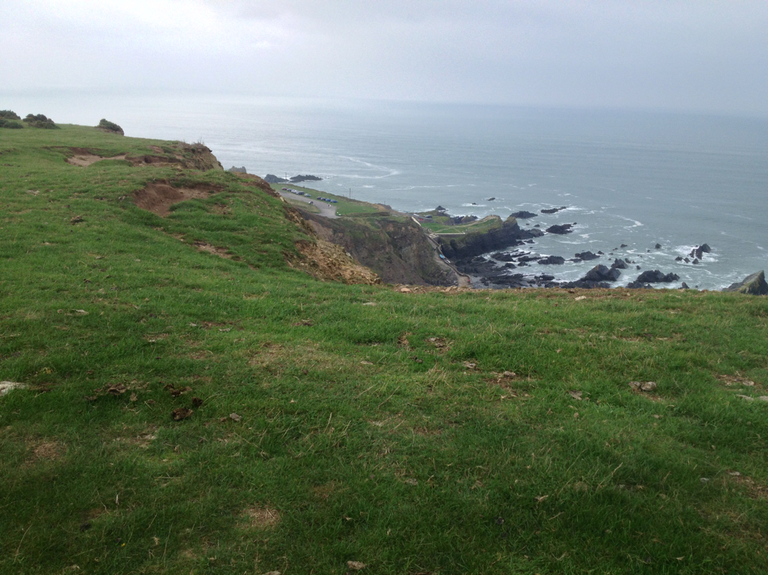 Way down there is where we took those beach/granite photos. 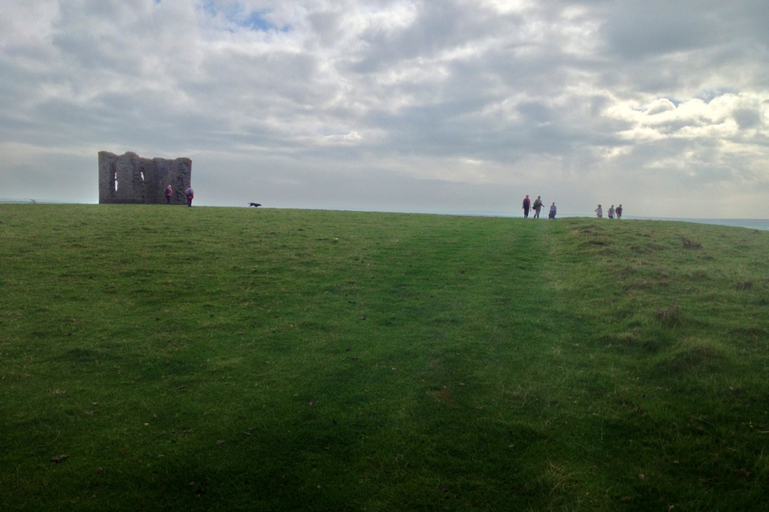 Except for the fact that it's missing the crashing waves, this photo captures the feel of this place. 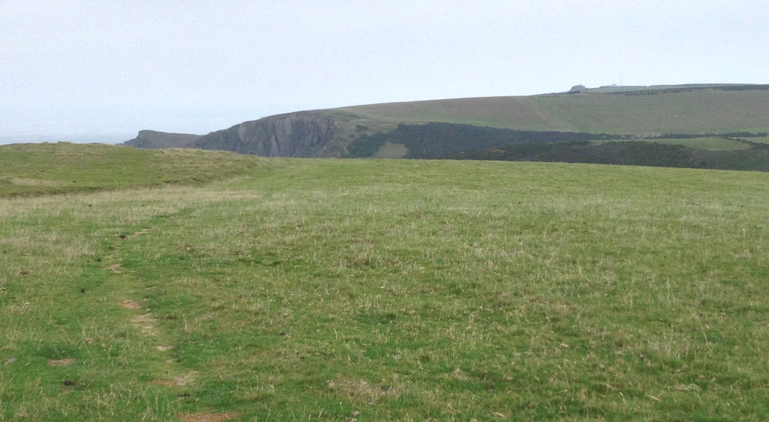 But then comes this. What are the chances of it being something easy?  We decide to keep going to see how bad it is.

​Might as well go ahead just a bit more to see round the bend, then decide whether to keep gong. 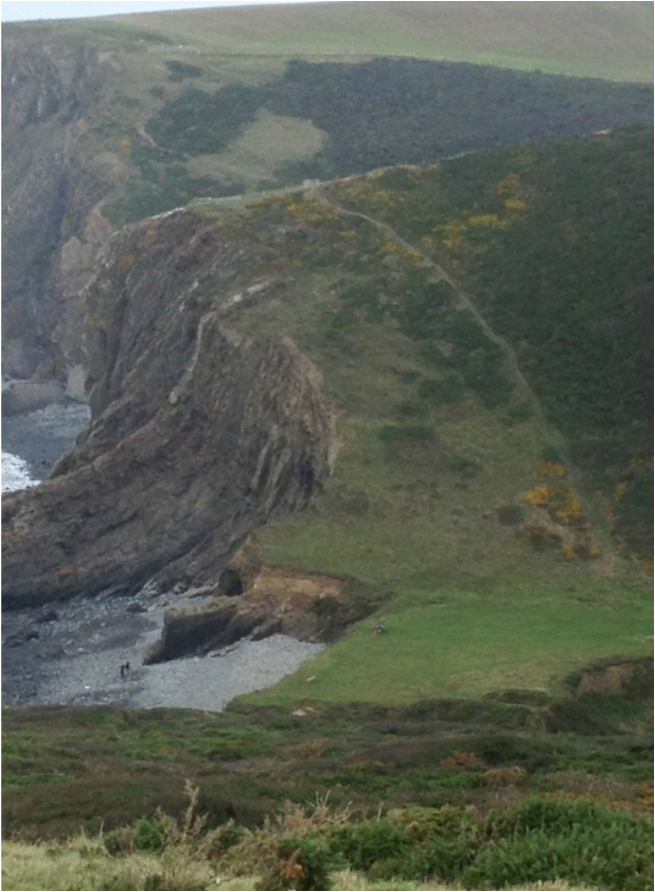 No way. Neither of us can face it. So we turn back right here on this very spot. 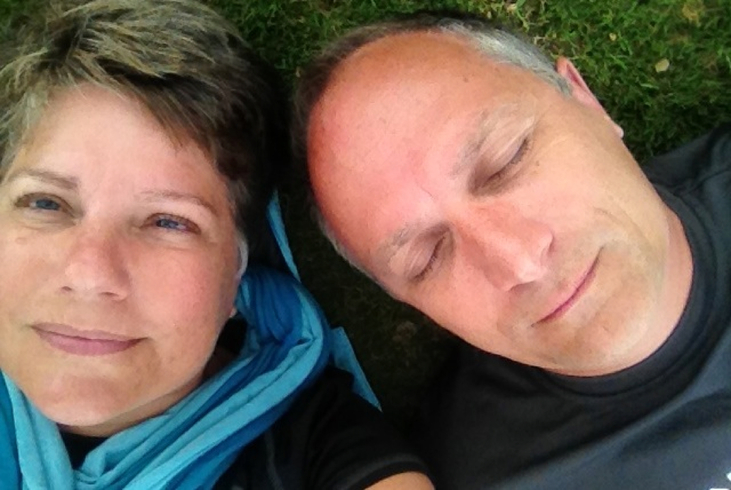 ​And lie down to rest a bit. Notice I am lying on my raincoat, because even though we chose our spot carefully, there is dried sheep and cattle and goat poop everywhere. I don't want it in my hair. 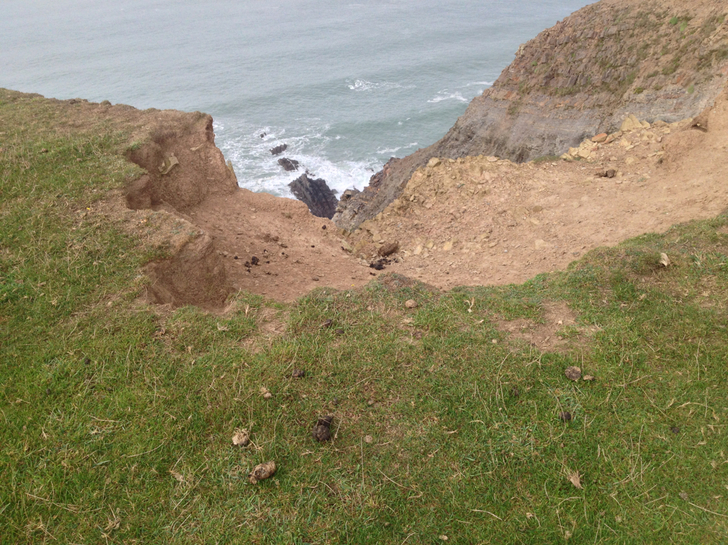 Don't be tripping over your feet here. 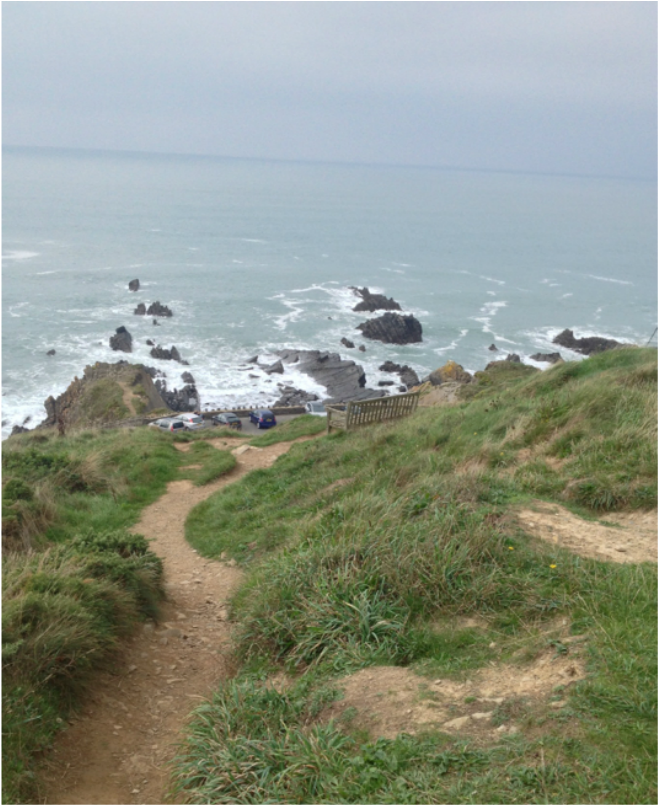 The parking lot. A sight for sore eyes.

In September, 2016, we will finish this hike. (Cue Scarlett among the burnt crops, Rhett riding off into the sunset.)
back to all hikes
next hike